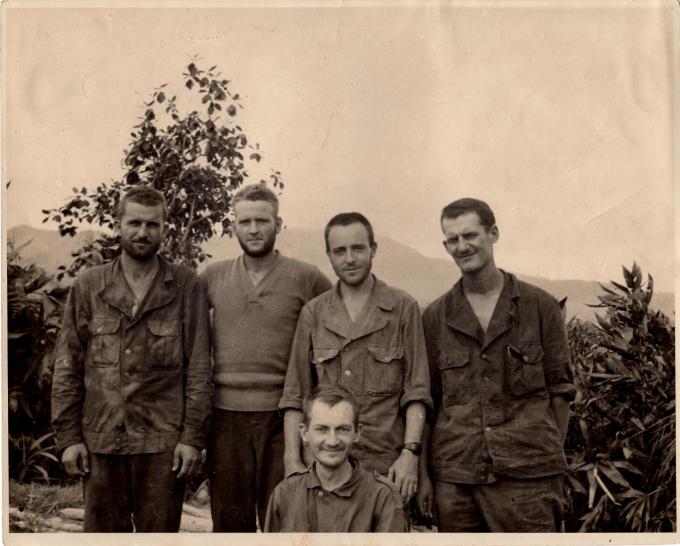 This location is a tribute to thirty-two Army Reserve officers from South Carolina, who at the height of the post-Pearl Harbor war chaos  left, irreversibly, all remaining vestiges of peacetime life and officially became players in the massive conflagration that would exemplify the United States’ involvement in World War II.  The book, titled, 32 Answered: A South Carolina Veterans’ Story, explains their significance to the whole and why we should remember them.

The February 1942 call-up placed them in unexpected company.  The 32nd “Red Arrow” Infantry Division, which was otherwise a unit drawn wholly from National Guard companies grounded in communities from Wisconsin and Western Michigan, had for the most part lived and trained at Camp Livingston, Louisiana since their activation to Federal service in October 1940.  While there they had participated (and performed well) in the massive 1941 Louisiana Maneuvers and in the Carolina Maneuvers later that same year.  Soon after the Pearl Harbor attack, however, the Army purged the officer complements of the respective Michigan and Wisconsin regiments, discharging those “over-age in grade” and otherwise unfit for combat just before they received orders to prepare to ship overseas.

Being that their Louisiana duty station placed the 32nd Division within the Fourth Corps Administrative Area, same as all ROTC programs in the Deep South, the substantial vacancies left in the companies and platoons of the 32nd Division were filled from the reserve officer rosters, and by sheer chance the preponderance of those assignees were products of the four pre-war cadet programs in South Carolina: Clemson A&M College, The Citadel, Presbyterian College, and Wofford College.  In perhaps a fitting coincidence, the title of the book actually is derived both from these thirty-two confirmed South Carolinians who reported to the Red Arrow Division as well as, ironically, the nomenclature of the Division itself.

It was with these Southerners newly in place that the Division abruptly received new orders redirecting it from Fort Devens, Massachusetts (in preparation for transport to the U.K.), to the West Coast; from there, these troops were expedited to Australia and eventually into the jungles of Papua New Guinea to meet a battle-hardened Japanese force.  There, in that first engagement at Buna-Sanananda, the Red Arrow Division’s three Infantry Regiments sustained over 90% casualties yet managed to hand the Japanese military its first defeat on land in the course of the Pacific War.  Those South Carolinians who survived and managed to return to duty after the Buna campaign stayed with the unit through subsequent Pacific campaigns from New Guinea forward to the Philippines; and, given the attrition levels of the initial Guard commanders at Buna, they emerged for all practical purposes as the new core of experienced leadership.  The few who stayed the entire war rightfully earned the distinction recognized by the 32nd Division Association of “most days in combat”– 654 days total– and thus amassed some of the highest combat hours of any American soldiers in any war.  Aside from being the first Infantry unit to take the fight back to the Japanese in late 1942–the first step in the “long road back” to liberating the Philippines– they actually were still fighting well past V-J Day (15 August 1945) and even accepted the surrender party of Japanese General Yamashita on 2 September 1945, the day of the peace treaty ceremony on the battleship Missouri in Tokyo Bay.

Because of the reluctance of these men to share their stories during their own lifetimes, and the relative lack of available 32nd Division records in general, the general awareness of their contribution to victory was just about lost.  By chance, enough surviving  family members still had papers, journals, photographs, and letters to help piece together their collective experiences to compare against the official record.  The story is told primarily as a veterans’ history and thus through their perspectives as closely as possible using the official campaign histories as a foundation.  However, because it is foremost a veterans’ history the story does not necessarily dwell on the combat narratives of the campaigns but instead on the experiences of the main characters, and there the overriding theme is one of disruption: how these men were torn away from their loved ones and idyllic peacetime existence despite their best attempts to hang on tenaciously until the last minute; their desires to finish the job at hand and return to the status quo; and, the hurdles that hampered their timely return, including both those imposed by the enemy as well as the Army’s politics, bureaucracy, and chronically overtaxed conditions in the Southwest Pacific.  Along the way, the story addresses the profound sense of loss–too often, heartbreaking–of a beloved son or husband and father, and the characteristic devastation it wrought on small-town families.

I am the author of this story and the one who discovered the utter collision of these particular citizen-soldiers with the inherent war emergency expedience and unit unfamiliarity as well as the generally undertrained and unprepared condition that existed at the time they went into combat at Buna.  Also, I was able to discern the transition of these men from the periphery of command to its core as the war progressed.  This trend had begun at Buna, and there is a defining moment when the shift occurred.

Periodically, I would like to use this web-blog as a forum to talk about different aspects of the story and about the creation of the book.  Each aspect is equally thought-provoking.